In which we are reminded that it’s good to have a map when working a major account.

I started walking at  9:00 am  after a solid English breakfast – two scrambled eggs, two strips of bacon, two sausages, grilled tomato, sautéed mushrooms, toast, and orange juice – planning to walk from Chipping Campden, a village in the Cotswolds region of England, to Stanton, a hamlet 10 miles away on public foot paths over rolling Cotswolds hills – roughly 5 hours walk, allowing time to enjoy the scenery.

Following the “Cotswold Way” trail markers one to the next under intermittent sunshine, occasional spits of rain,  and a persistent westerly wind, I walked – Dover’s Hill, Fish Hill, Broadway Tower, through the beautiful village of Broadway. 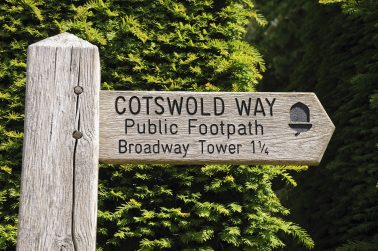 After crossing a flat bit, I began climbing again across a farm field, through a thick tangle of  woods, then out to a gradual ascension on a farm path, then a winding farm road, for perhaps a half mile through the farm.

Rounding a rising bend in the road,  I was surprised to see two other hikers, the first people I’d seen on the trail all the day, sitting on rock enjoying some lunch. I waved, smiled,  said hello, and kept walking, eager to reach my bed & breakfast for the evening, about 35 minutes away,  I thought.

About 50 yards after I passed the two other hikers, I  stopped dead in the road. I could see footpath markers all around me and none of them for the “Cotswold Way.”

Feeling  uncomfortable but thinking, “It must be a bit further on,” I continued walking. Vision largely obscured by trees on both sides of the road and a now persistent rain, I continued….. for almost two miles…. arriving in the village of Snowshill. Miles off course.

With a deep breath, a bit of guidance from the folks in the Snowshill pub, and my compass, I retraced my steps for a mile, took a left on a rocky and frequently brambles-and-thorns bridal path no self-respecting horse would choose and (two hours later) arrived in Stanton. I knocked on the door of my  B&B for the night.

“Good to see you, “ said my host, Angela. It was 5:00 pm, three hours later than my expected arrival time. “You’re quite late. Where’ve you been?”

“Oh, you DID go out of your way,” she clucked.  “You must have missed your turn.”

Yes, I must have missed my turn.  As it turns out, just as I’d waved hello to the two other hikers. By looking at them, I’d walked right past a very clear trail marker that pointed to the right.  35 minutes from Angela’s B&B. My mistake cost me three hours and an extra 5 – 6 miles of soggy walking.

“Tomorrow….,” Angela said to me later, after dinner… “tomorrow, if this happens again….”

Not waiting long for my response, she whispered,   “Go back to the last place where you knew you were on the right path and look again.”

FOOD FOR THOUGHT:  When tackling significant accounts,  it’s good to develop  account plans – maps – rather than hoping that we find and recognize trail markers others have left for us at just the right places. Second, when feeling lost in an account, it’s good to have a coach to whom we can turn to ask for guidance, at the moment,  so that we don’t end up, miles out of our way,  in the brambles.