In which we are reminded to warm people up a little bit before we “turn on the heat” in prospecting conversations.

Looking like your garden-variety 90 foot long and 55 foot wide multi-colored placemats, the balloons lay flat and still on the morning wet grass of Memorial Park in Colorado Springs, still in the shadows as the sun began to rise. Balloon crews milled about, wrestling baskets and other gear into place. We sidled up to one of the crews.

“Good morning! Have you ever seen one of these go up?”, the pilot asked.

Behind him, his crew finished the final steps of attaching the passenger baske 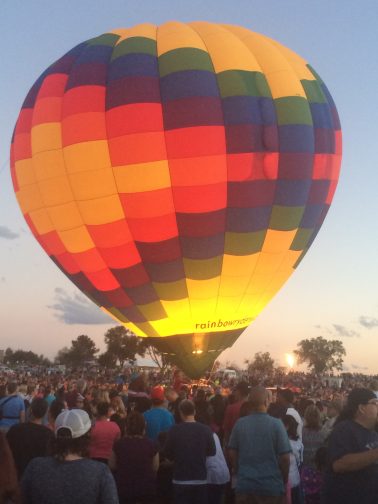 t to the balloon and wheeling a 42” gasoline-powered fan into place, just to the left of the basket, also laying on its side. Two crew members stretched the mouth of the balloon open while the pilot fired up the fan, pushing air into the balloon.

Noticing that we seemed a bit restless, the pilot shouted over the fan, “We have to wait until it’s almost full before we shoot the flame in there. Otherwise we’d burn the skin. When that happens, it’s game over.”

The fan continued, rasping, roaring, pushing more and more air into the larger and larger balloon until, from mouth to top, the balloon towered over us, fat and full, almost fully inflated, lying on its side. All the while, two team members stretched and STRETCHED the mouth of the balloon wider to allow more air inside.

After about eight minutes, the pilot pulled the fan back a bit, then crawled into the passenger basket lying on its side, rose, and turned toward the balloon. Grasping the controls of the propane burners on the top of the basket, he shot a three second burst of flame into the balloon mouth, heat so intense that, even at distance of ten yards, we felt uncomfortable.

A three second burst, then he paused to see how the balloon reacted.

And, then, v e r y slowly, about ten minutes into the process, accompanied by the cheers and clapping of the crowd gathered ‘round, the balloon tipped up, vertical. Ready to fly.

When we meet people who could be prospects or network connections for us, we need to be careful not to turn on the flames too fast lest we burn the potential prospects or connections and lose them. Game over.

The balloon metrics work pretty well. 6 minutes to 7 minutes of conversation to fill up the relationship with a little air, so it has some body and shape, before we “blast a little flame” with one or two exploratory questions to expand the conversation more purposefully. Then, we pause so see how our conversation partner reacts before asking one or two more, so that, by about ten minutes, we can see whether the conversation will fully inflate, “tip up,” and fly or whether it’s time to move on to someone else.

See a team inflate a balloon here. See more articles like these here.