In which we are reminded to keep our competitors clearly in view and to distance and differentiate ourselves.

The gorgeous 540 yard 18th hole at Pebble Beach Golf Links in Carmel stretches along Still Water Cove – water to the left, houses and club house to the right, one of the most picturesque 18th holes in the game.

Enjoying the sun, sitting on the patio behind The Lodge At Pebble Beach, a friend and I looked up the fairway toward the tee, noticing a flock of gray Canadian geese to the right and a party of four loosely working their way down the left. Three of them looked like they were together – roughly matching pastel colored golf shirts. The fourth seemed an outlier – he was wearing a red polo shirt.

As they moved toward us, we could see that the three pastel-shirted players were moderately skilled. Red-shirt seemed to be much stronger with a smoother swing, hitting longer shots more accurately. 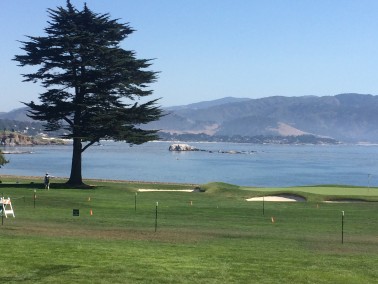 At some point, about 100 yards out, Red-shirt’s ball was closest to the pin by about 30 yards. Normally, he would play his ball last. But, apparently, he asked the others whether he could play first and, apparently, they agreed.

“He shouldn’t be doing that,” my friend observed. “That’s just rude.”

“What should he have done?”, I asked.

“Either waited with them until they’d hit, since his ball was further ahead than theirs or walked ahead but well clear of their path and visual line of sight to the green.”

Not a bad strategy more generally. When playing in the same field as our competitors, either keep them in front of us, so we can see what they’re doing and make our own play safely, or cut a path around them, clearly distancing and differentiating ourselves. The last thing we want is to walk right in front of them so they can blind side us and blast us off the course with either well placed or errant shots.