In which we are reminded that buyers have so many choices that, no matter how much work we invest in differentiating the details of our products, they remember only one or two IF they distinctly stand out.

The Travis County, Texas, Expo Center feels as large as the State of Delaware and, even though we had parked in a far distant parking lot, we could hear the dragsters cackle from the other side of the main Expo buildings as we walked toward the main entrance gate to “the show” – the 2016 Lone Star Rod and Kustom Round Up, one of the largest hot rod and custom car meets in the country, open to American cars, 1963 and earlier.  Hundreds of them, driven and hauled from all over the country.

Since the dragsters were still cackling as we paid our admission fee, we wandered their way to have a look, stopping about 20 yards from the cars in a crowd of (mostly) men dressed (mostly) in black T-shirts and jeans, semi-circling the three machines.  When the drivers gunned the engines, particularly the AA/Fuel dragster engine, the initial sound pressure shock wave blasted us in the chest, stabbed our eardrums (even with our fingers firmly planted in our ears), and shook the ground we stood on, vibrating our toes.

But “dragsters” wasn’t why we came.  They were an hors d’oeuvre. 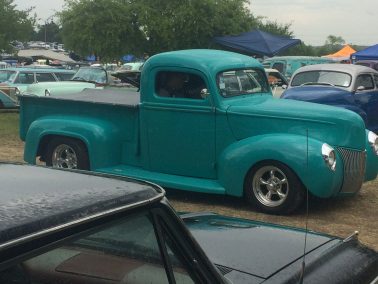 We walked the aisles, up and down, admiring the cars, talking to some of the owners, and checking out the car-related T-shirts and the men and women dressed in 1950s styles, from shoes to hair-dos.  Occasionally, an owner would fire up a car and tool around the display area for a bit, engine burbling and bumping at low rpms.

After about two hours, my show-buddy said, “I’ve had enough.”  I was shocked! We’d barely covered half the cars on display. “They’re all beginning to look the same to me,” he shrugged. So we left.

Next day, comparing notes to pick the cars we thought would be “best in show,” we could recall only a few.

Since we aren’t “car people” – highly knowledgeable buyers, as it were – the hundreds of hours and thousands of dollars other owners had invested in their cars, working the minute details inside and underneath to customize them and differentiate theirs from others sitting row by row next to them in the Expo grounds…  Completely lost on us the next morning.

Out of the literally hundreds of cars we saw, we could recall only cars that were painted “one of these in the show” colors – a light teal Willys truck  came to mind – and the half-dozen cars we saw cruising through the show grounds. That was it!  So… we picked our winner from among them.